Assessment and Refurbishment of Steel Structures 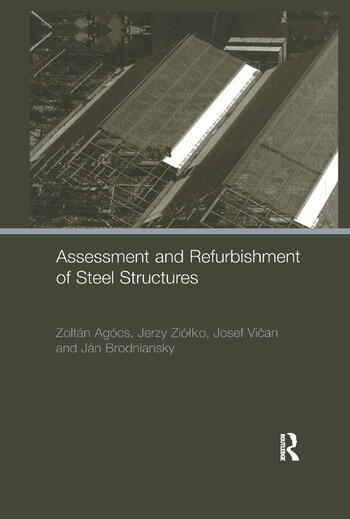 Assessment and Refurbishment of Steel Structures

The book analyses the causes of failures, presents up-to-date information on the methodology and equipment used for diagnosis of failures, and includes a survey of repair and reconstruction techniques. The methods described are illustrated by examples of successful real-life case studies, and relevant codes are examined where appropriate.

Assessment and Refurbishment of Steel Structures is a comprehensive combination of both theory and practice, and is an essential reference for engineers engaged in the modernisation and repair of civil engineering steel structures.

Zoltan Agocs from 1982 he became an associate professor; from 1990 he was a professor. He was senior lecturer and from 1994 to 2000 he was the vice-dean of Architectural Department. He wrote several course books and monographies. He was the member of several scientific groups, from 1998 he was the honorary professor of Technical University of Timisoara.

Jan Brodniansky lectures in the Depart of Steel and Timber,  Slovak University of Technology.

Josef Vican is Full professor at University of Zilina, Faculty of Civil Engineering.