British Sporting Literature and Culture in the Long Eighteenth Century 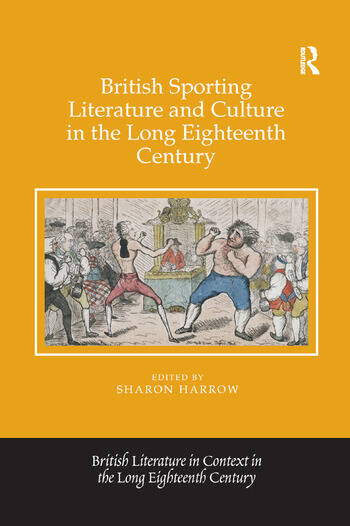 British Sporting Literature and Culture in the Long Eighteenth Century

Sport as it is largely understood today was invented during the long eighteenth century when the modern rules of sport were codified; sport emerged as a business, a spectacle, and a performance; and gaming organized itself around sporting culture. Examining the underexplored intersection of sport, literature, and culture, this collection situates sport within multiple contexts, including religion, labor, leisure time, politics, nationalism, gender, play, and science. A poetics, literature, and culture of sport swelled during the era, influencing artists such as John Collett and writers including Lord Byron, Jonathan Swift, and Henry Fielding. This volume brings together literary scholars and historians of sport to demonstrate the ubiquity of sport to eighteenth-century life, the variety of literary and cultural representations of sporting experiences, and the evolution of sport from rural pastimes to organized, regular events of national and international importance. Each essay offers in-depth readings of both material practices and representations of sport as they relate to, among other subjects, recreational sports, the Cotswold games, clothing, women archers, tennis, celebrity athletes, and the theatricality of boxing. Taken together, the essays in this collection offer valuable multiple perspectives on reading sport during the century when sport became modern.

Table of contents to come.

Sharon Harrow is Professor of English at Shippensburg University of Pennsylvania, USA.