Byron: The Poetry of Politics and the Politics of Poetry 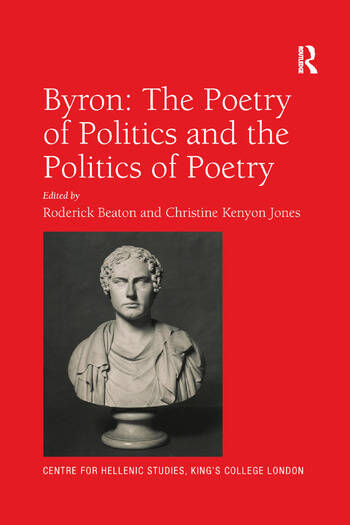 Byron: The Poetry of Politics and the Politics of Poetry

'It is no great matter, supposing that Italy could be liberated, who or what is sacrificed. It is a grand object - the very poetry of politics. Only think - a free Italy!!! Why, there has been nothing like it since the days of Augustus.' So wrote Lord Byron in his journal, in February 1821, only days before the outbreak of revolution in Greece, where three years later he would die in the service of the revolutionary cause. For a poet whose life and work are interlaced with action of multiple sorts, surprisingly little attention has been devoted to Byron's engagement with issues of politics. This volume brings together the work of eminent Byronists from seven European countries and the USA to re-assess the evidence. What did Byron mean by the 'poetry of politics'? Was he, in any sense, a 'political animal'? Can his final, fateful involvement in Greece be understood as the culmination of earlier, more deeply rooted quests? The first part of the book examines the implications of reading and writing as themselves political acts; the second interrogates the politics inherent or implied in Byron's poems and plays; the third follows the trajectory of his political engagement (or non-engagement), from his abortive early career in the British House of Lords, via the Peninsular War in Spain to his involvement in revolutionary politics abroad.

Peter Cochran: an appreciation, Kenyon Jones / Introduction, Beaton and Kenyon Jones / Part I Politics of Writing and Reading: Byron criticism in the age of Margaret Thatcher and Michael Foot, Gross / Byron’s lyrics and the politics of publication, Stauffer / Byron’s manipulation of authors and addressees in his comical political poems, Modrzewska / Byron and the politics of writing women, Camilleri / She walks in beauty like the night in which all cows are black: Byron’s nonhuman, Morton / Byron, Orwell, politics and the English language, Graham /Part II Politics in the poetry: The politics and poetry of Byron’s Romantic Hellenism: fragmentation as a discursive strategy in The Giaour, Procházka / Poetry, politics and prophecy: The Age of Bronze, The Vision of Judgement and The Prophecy of Dante, Beatty / Byron the Cynic, Havard / Systems and their boundaries: Byron’s poetry and politics in Italy, Böhm / The politics of Don Juan, Cochran / ‘A wilderness of the most rare conceits’: imagining politics in the English cantos of Don Juan, O’Neill / Byron and the politics of heroic transformation, Horová / Part III ‘When a man hath no freedom to fight for at home…’: ‘I am not made for what you call a politician’: Byron’s silent parliamentary experiences, Kenyon Jones / Byron and the ‘Spanish Patriots’: the poetry and politics of the Peninsular War (1808-1814), Coletes-Blanco / History, prophecy, revolution: Italian politics in Byron and Foscolo, Mucignat / From Risorgimento to Fascism: the politics of Parisina, Pal-Lapinski / Childe Harold’s Pilgrimage, British travellers to Greece and the ‘idea of Europe’, Grammatikos / The politics of altruism, Minta / Byron and Greece: lessons in ‘political economy’, Beaton / Afterword, Hamilton.

Roderick Beaton is Koraes Professor of Modern Greek and Byzantine History, Language and Literature, and Director of the Centre for Hellenic Studies, at King’s College London.

is a Research Fellow in the Department of English at King’s College London.