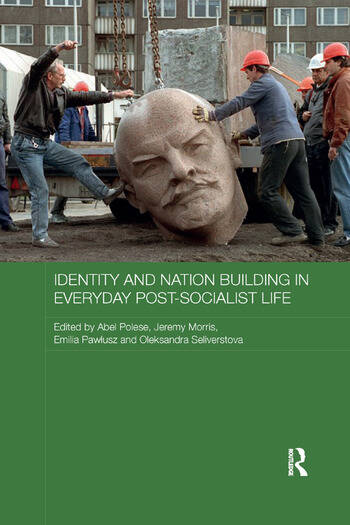 This book explores the function of the “everyday” in the formation, consolidation and performance of national, sub-national and local identities in the former socialist region. Based on extensive original research including fieldwork, the book demonstrates how the study of everyday and mundane practices is a meaningful and useful way of understanding the socio-political processes of identity formation both at the top and bottom level of a state. The book covers a wide range of countries including the Baltic States, Ukraine, Russia, the Caucasus and Central Asia, and considers “everyday” banal practices, including those related to consumption, kinship, embodiment, mobility, music, and the use of objects and artifacts. Overall, the book draws on, and contributes to, theory; and shows how the process of nation-building is not just undertaken by formal actors, such as the state, its institutions and political elites.

Part I. Music and cultural events

2. Can musicians build the nation? Popular music and identity in Estonia

3. The Georgian National Museum and the Museum of Soviet Occupation as loci of informal nation building

4. Made in Ukraine: Consumer Citizenship During EuroMaidan Transformations

5. National Food, Belonging, and Identity among post-Soviet migrants in the UK

6. Consumer Citizenship and Reproduction of Estonianness

7. How to Pronounce "Belarusian"? Negotiating Identity through Naming

8. Nuanced Identities at the Borders of the European Union: Romanians in Serbia and Ukraine

9. Can Nation Building be spontaneous? A (belated) ethnography of the Orange Revolution

Abel Polese is Senior Research Fellow at the Institute of Governance and Political Science of Tallinn University, Estonia, and the School of Law and Government of Dublin City University, Ireland.

Jeremy Morris is Co-Director of the Centre for Russian, European and Eurasian Studies and a Senior Lecturer in Russian Studies at the University of Birmingham, UK.

Oleksandra Seliverstova is a Marie Curie Fellow at the Institute of Political Science and Governance at Tallinn University, Estonia.

Emilia Pawłusz is an early stage researcher in the School of Governance, Law and Society at Tallinn University, Estonia.