Imperial Lineages and Legacies in the Eastern Mediterranean
Recording the Imprint of Roman, Byzantine and Ottoman Rule 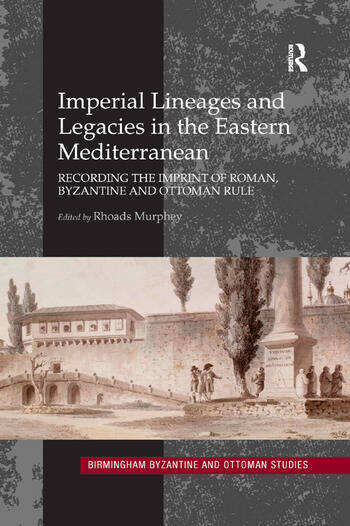 Imperial Lineages and Legacies in the Eastern Mediterranean: Recording the Imprint of Roman, Byzantine and Ottoman Rule

The comparative study of empires has traditionally been addressed in the widest possible global historical perspective with comparison of New World empires such as the Aztecs and Incas side by side with the history of imperial Rome and the empires of China and Russia in the medieval and modern periods. Surprisingly little work has been carried out focusing on the evolution of state control and imperial administration in the same territory; approached in a rigorous and historically grounded fashion over a wide extent of historical time from late antiquity to the twentieth century. The empires of Rome, Byzantium, the Ottomans and the latter-day imperialists in the nineteenth and early twentieth centuries, all inherited or seized and sought to develop overlapping parts of a common territorial base in the Eastern Mediterranean and all struggled to contain, control or otherwise alter the political, cultural and spiritual allegiances of the same indigenous population groups that were brought under their rule and administration.

The task undertaken in Imperial Lineages and Legacies in the Eastern Mediterranean is to investigate the balance between continuity and change adopted at various historical conjunctures when new imperial regimes were established and to expose common features and shared approaches to the challenge of imperial rule that united otherwise divergent societies and imperial administrations. The work incorporates the contributions by twelve scholars, each leading practitioners in their respective fields and each contributing their particular insights on the shared theme of imperial identity and legacy in the Mediterranean World of the pagan, Christian and Muslim eras.

Introduction: Haldon and Murphey / Part 1 Law and Empire: Byzantine law courts and their Roman antecedents, Morris / Hybridity in Ottoman legal tradition as a source of flexibility in governing the empire: an overview with particular reference to the application of the ruler’s executive judicial or örfi powers, Murphey / Custom, tradition, and ‘law’ in the post-medieval Cyclades, Kasdagli / Part 2 Assertion and Disputation of Imperial identity in Art: Reflections on the influence of imperial art on Christian art, Brenk / God or emperor?: Imperial legacies in Byzantine Christian visual culture, Brubaker / Part 3 Individual, Group and Corporate Identity in an Imperial Context: Religious pluralism in the Balkans during the late Ottoman imperial era: towards a dynamic model, Clayer / Art, language and power in the late Ottoman Empire, Strauss / The Ottoman legacy to post-Ottoman states, Anscombe / Part 4 Empire and Region / Region and Empire: Regional impact of the Ottoman Empire in Greece: archaeological perspectives, Bintliff / Imperial impacts, regional diversities and local responses: island identities as reflected on Byzantine Naxos, Vionis / Legacies in the landscape: the Vostizza District, c.1460-1715, Wagstaff.

Rhoads Murphey was Reader in Ottoman Studies at the Centre for Byzantine, Ottoman and Modern Greek Studies, University of Birmingham, UK, and is now Professor of History at Ipek University (Ankara), Turkey.