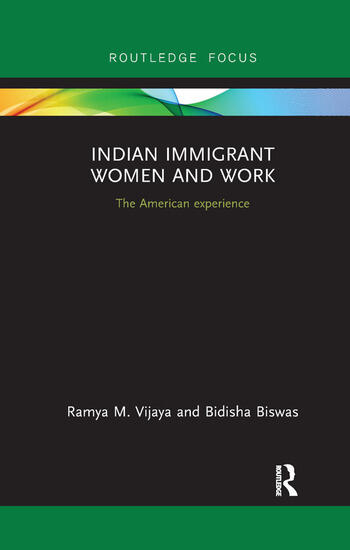 In recent years, interest in the large group of skilled immigrants coming from India to the United States has soared. However, this immigration is seen as being overwhelmingly male. Female migrants are depicted either as family migrants following in the path chosen by men, or as victims of desperation, forced into the migrant path due to economic exigencies.

This book investigates the work trajectories and related assimilation experiences of independent Indian women who have chosen their own migratory pathways in the United States. The links between individual experiences and the macro trends of women, work, immigration and feminism are explored. The authors use historical records, previously unpublished gender disaggregate immigration data, and interviews with Indian women who have migrated to the US in every decade since the 1960s to demonstrate that independent migration among Indian women has a long and substantial history. Their status as skilled independent migrants can represent a relatively privileged and empowered choice. However, their working lives intersect with the gender constraints of labor markets in both India and the US. Vijaya and Biswas argue that their experiences of being relatively empowered, yet pushing against gender constraints in two different environments, can provide a unique perspective to the immigrant assimilation narrative and comparative gender dynamics in the global political economy.

Casting light on a hidden, but steady, stream within the large group of skilled immigrants to the United States from India, this book will be of interest to researchers in the fields of political economy, anthropology, and sociology, including migration, race, class, ethnic and gender studies, as well as Asian studies.

Ramya M. Vijaya is a Professor of Economics at Stockton University, New Jersey, US. Besides courses in Economics, she also teaches in the interdisciplinary Global Studies Minor.

is Professor of Political Science at Western Washington University, US. She previously served as a policy adviser on South Asia to the United States Department of State.