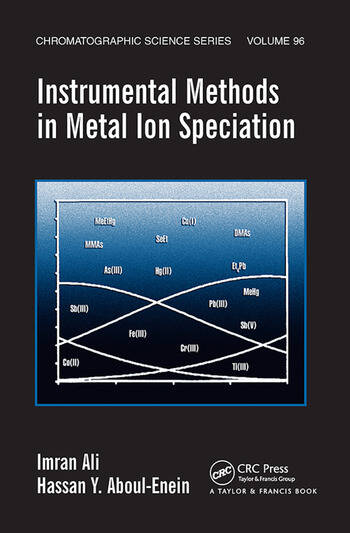 The knowledge of metal ion speciation is essential for predicting the exact toxicities of metal ion species in the environment. Metal ions can exist in various oxidation states, each of which possesses different physical and chemical properties as well as exhibit varying toxicities. Often, toxicity data is unreliable because it is based on metal ion concentration measurements that fail to identify a dominant species either more or less harmful than the average. Instrumental Methods in Metal Ion Speciation provides analytical techniques and experimental methodologies for determining the concentration of the different physicochemical forms of metal ions in environmental and biological samples, leading to more accurate measurements of actual toxicity.

The authors introduce the principles of metal ion speciation and discuss important analytical techniques such as gas and liquid chromatography, capillary electrophoresis, and both electrochemical and radiochemical methods used to determine concentration and composition. They present a range of liquid chromatographic approaches, including capillary electrochromatography and high-performance, ion, ion pair, micellar electrokinetic, size exclusion, chiral, and supercritical fluid chromatographies for all metal ion species. Comprehensive in scope, the text covers the sources, distribution, toxicity, biotransformation, and biodegradation of each metal ions species as well as extraction methods, sample preparation, and experimental optimization techniques that can be useful in designing future experiments.

Instrumental Methods in Metal Ion Speciation is a unique and valuable source of reference for scientists, academics, and researchers involved in analytical, biological, pharmaceutical, and environmental chemistries, as well as material industries, geochemistry, agriculture, biotechnology, and occupational safety and regulations.