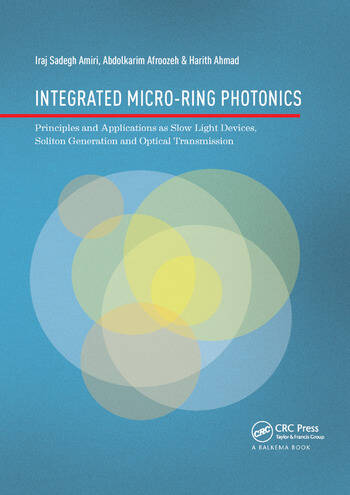 Micro-ring resonators (MRRs) are employed to generate signals used for optical communication applications, where they can be integrated in a single system. These structures are ideal candidates for very large-scale integrated (VLSI) photonic circuits, since they provide a wide range of optical signal processing functions while being ultra-compact. Soliton pulses have sufficient stability for preservation of their shape and velocity. Technological progress in fields such as tunable narrow band laser systems, multiple transmission, and MRR systems constitute a base for the development of new transmission techniques. Controlling the speed of a light signal has many potential applications in fiber optic communication and quantum computing. The slow light effect has many important applications and is a key technology for all optical networks such as optical signal processing. Generation of slow light in MRRs is based on the nonlinear optical fibers. Slow light can be generated within the micro-ring devices, which will be able to be used with the mobile telephone. Therefore, the message can be kept encrypted via quantum cryptography. Thus perfect security in a mobile telephone network is plausible. This research study involves both numerical experiments and theoretical work based on MRRs for secured communication.

Dr. I.S. Amiri received his B. Sc (Hons, Applied Physics) from Public University of Oroumiyeh, Iran in 2001 and a gold medalist M. Sc. from Universiti Teknologi Malaysia (UTM), in 2009. He was awarded a PhD degree in nanophotonics in 2014. He has published more than 260 journals/conferences and books in Optical Soliton Communications, Nano photonics, Nonlinear Fiber Optics, Quantum Cryptography, Optical Tweezers, Nanotechnology, Biomedical Physics and Biotechnology Engineering.

completed his MSc in the field of Astronomy at Shiraz University, Iran, in 2001. He was awarded a PhD degree in photonics from Universiti Teknologi Malaysia (UTM) in 2014. He has published more than 70 journals/conferences papers and books/chapters in Optical Soliton Communications, Laser Physics, photonics, Nonlinear fiber optics, Quantum Cryptography, Nanotechnology, Biomedical Physics and Biotechnology Engineering. Now, He is working in Young Researchers and Elite Club, Jahrom Branch, Islamic Azad University, Jahrom, Iran and The Department General of Fars Province Education, Iran.

Dr. Harith Ahmad received the PhD degree in laser technology from the University of Wales, Swansea, UK, 1983. He is a Professor with the Department of Physics, University of Malaya where he has actively pursued research activities in the field of photonics since 1983. Currently he is also the Director of Photonics Research Centre, University of Malaya. He is the author of more than 850 papers in international journals. His research interest is in lasers, fiber-based devices for telecommunications, and fiber-based sensor devices. Dr. Ahmad is a Fellow of the Academy of Sciences, Malaysia.