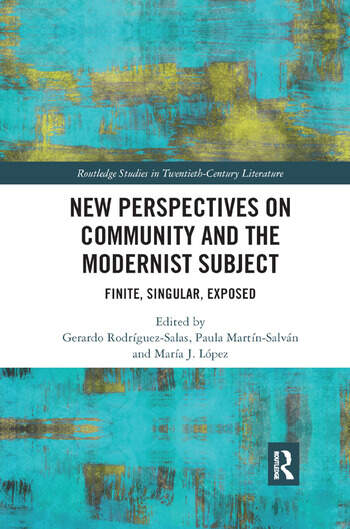 New Perspectives on Community and the Modernist Subject: Finite, Singular, Exposed offers new approaches to the modernist subject and its relation to community. With a non-exclusive focus on narrative, the essays included provide innovative and theoretically informed readings of canonical modernist authors, including: James, Conrad, Joyce, Woolf, Lawrence, Mansfield, Stein, Barnes and Faulkner (instead of Eliot), as well as of non-canonical and late modernists Stapledon, Rhys, Beckett, Isherwood, and Baldwin (instead of Marsden). This volume examines the context of new dialectico-metaphysical approaches to subjectivity and individuality and of recent philosophical debate on community encouraged by critics such as Alain Badiou, Jean-Luc Nancy, Maurice Blanchot, Giorgio Agamben, Roberto Esposito and Jacques Derrida, among others, of which a fresh re-definition of the modernist subject and community remains to be made, one that is likely to enrich the field of "new Modernist studies". This volume will fill this gap, presenting a re-definition of the subject by complementing community-oriented approaches to modernist fiction through a dialectical counterweight that underlines a conception of the modernist subject as finite, singular and exposed, and its relation to inorganic and inoperative communities.

Dr. Paula Martín-Salván is Associate Professor of English at the University of Córdoba (Spain). Her current research focuses on the representation of communities in modernist and postmodernist fiction, in the light of theorizations by Jean-Luc Nancy, Maurice Blanchot and J. Hillis Miller. Her recent publications include the edited volume Community in Twentieth Century Fiction (Palgrave 2013, co-eds. Julián Jiménez and Gerardo Rodríguez) and the monograph The Language of Ethics and Community in Graham Greene’s Fiction (Palgrave 2015).

Dr. Gerardo Rodríguez Salas is Associate Professor of English at the University of Granada (Spain). He has published on literary theory and twentieth-century women’s fiction (Mansfield, Hurston, Stein, Frame, Carter, Bird) and is a specialist in New Zealand and Australian Literature. He is the author of three books on Katherine Mansfield (the latest by Edwin Mellen Press, 2012) and co-editor of Community in Twentieth-Century Fiction (Palgrave, 2013). His most recent articles/chapters have appeared in Continuum, Palgrave, Australian Literary Studies, Antipodes, FEMSPEC, JASAL, Bilingual Review, Atlantis and Meanjin.

Dr. Maria J. Lopez teaches in the English Department at the University of Córdoba, Spain, where she received her PhD in English Literature in 2008. She has published Acts of Visitation: The Narrative of J.M. Coetzee (Rodopi, 2011), has co-edited the special number "J.M. Coetzee and the non-English Literary Traditions" in EJES (2016), and has published in journals such as the Journal of Southern African Studies (Terence Ranger Prize 2010), the Journal of Commonwealth Literature, English Studies, or English in Africa.