New Studies in Medieval and Renaissance Gdansk, Poland and Prussia 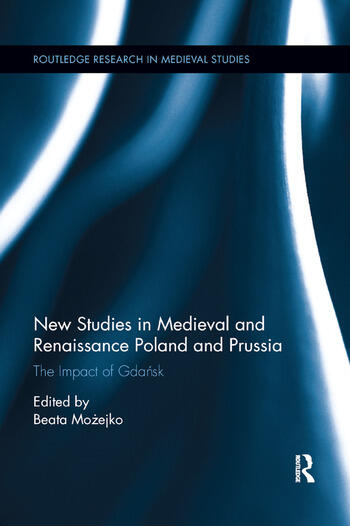 New Studies in Medieval and Renaissance Gdansk, Poland and Prussia


New Studies in Medieval and Renaissance Poland and Prussia: The Impact of Gdańsk

draws together the latest reseach conducted by local historians and archaeologists on the city of Gdańsk and its impact on the surrounding region of Pomerania and Poland as a whole.

Beginning with Gdańsk’s early political history and extending from the 10th to the 16th century, its twelve chapters explore a range of political, social, and socio-cultural historical questions and explain such phenomena as the establishment and development of the Gdańsk port and city. A prominent theme is a consideration of the interactions between Gdansk and Poland and Prussia, including a look into the city’s links with the State of the Teutonic Order in Prussia and the Kingdom of Poland under the rule of the Piast and Jagiellonian dynasties. The chapters are placed in the historical context of medieval Poland as well as the broader themes of religion, the matrimonial policy of noble families or their contacts with the papacy.

This book is an exciting new study of medieval Poland and unparalleled in the English-speaking world, making it an ideal text for those wanting to deepen their knowledge in this subject area.

1.The political history of Gdańsk from the town beginnings to the 16th century

1.1 The political history of Gdańsk: from the early 10th to the 14th century

1.2. The political history of Gdańsk: from the early 15th to the 16th century

2.Gdańsk Chancellery and Registers in the 14th–15th Centuries

3.Two Local Empires in Confrontation. Poland and Lithuania Competing with the Teutonic State to Dominate the South-Eastern Region of the Baltic Sea
(the End of the 14th c. to 1409)

4. Crafts after decline of the Teutonic Order State. Case study of Malbork

5.Religion in Gdańsk in the Middle Ages and Early Modern Times: from St. Adalbert’s Mission to the Reformation Victory

6 . Maritime Gdańsk in the second half of the 14th and the 15th century: the phenomenon of privateer Paul Beneke and the great caravel Peter von DanzigBeata Możejko

7. The city of Gdańsk faces the threat of Danish privateers at the end of the 15th and during the 16th century.

9. In the Melting Pot of Different Traditions, Styles, and Tastes. Gothic Panel Painting in Gdańsk

10. Faith and political strategy. Artistic donations for St. Mary's Church in Gdańsk during the reign of the Teutonic Order

11. Inter-regional marital alliances as an element of marriage strategies of the Greater Polish higher nobility in late medieval times (from the late 14th to the early 16th centuries)

12. Ceremony and pleasure on the occasion

Beata Możejko is Professor in the Department of Medieval History of Poland and Auxilliary Sciences of History, Institute of History, University of Gdańsk (Poland). Her main field of interest is history of late medieval Gdańsk and of Hanseatic League. She focuses also on the study of medieval society and King of Poland Kazimierz Jagiellończyk (1447-1492). In her recent monograph, she pays attention to Great caravel „Peter von Danzig" 1462-1475 (2011). She is aslo co-editor of the volumes: The natural history of food. Between Ancient Time and The Nineteenth Century (2012); Catalogue of documents and letters of the kings of Poland. From the State Archive in Gdańsk (to 1492) (2014) and In the era of sailing ships. Sea between Ancient Time and The Eighteenth Century (2015).