Normality and Disability
Intersections among Norms, Law, and Culture 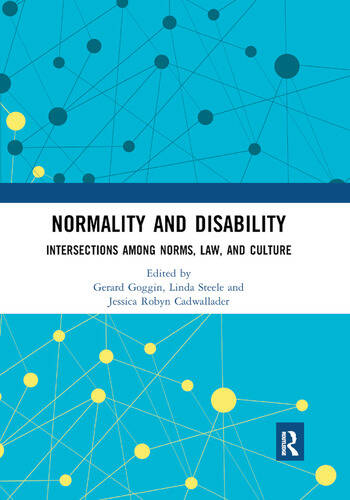 Normality and Disability: Intersections among Norms, Law, and Culture

Hotly contested, normality remains a powerful, complex category in contemporary law and culture. What is little realized are the ways in which disability underpins and shapes the operation of norms and the power dynamics of normalization.

This pioneering collection explores the place of law in political, social, scientific and biomedical developments relating to disability and other categories of ‘abnormality’. The contributors show how law produces cultural meanings, norms, representations, artefacts and expressions of disability, abnormality and normality, as well as how law responds to and is constituted by cultures of disability. The collection traverses a range of contemporary legal and political issues including human rights, mercy killing, reproductive technologies, hate crime, policing, immigration and disability housing. It also explores the impact and ongoing legacies of historical practices such as eugenics and deinstitutionalization.

Of interest to a wide range of scholars working on normality and law, the book also creates an opening for critical scholars and activists engaged with other marginalized and denigrated categories, notably contesting institutional violence in the context of settler colonialism, neoliberalism and imperialism, to engage more richly and politically with disability. This book was originally published as a special issue of the Continuum journal.

Introduction – Normality and disability: intersections among norms, law, and culture  1. Fit or fitting in: deciding against normal when reproducing the future  2. Eccentricity: the case for undermining legal categories of disability and normalcy  3. Eugenics and the normal body: the role of visual images and intelligence testing in framing the treatment of people with disabilities in the early twentieth century  4. The construction of access: the eugenic precedent of the Americans with Disabilities Act  5. Disability and torture: exception, epistemology and ‘black sites’  6. Mental capacity and states of exception: revisiting disability law with Giorgio Agamben  7. Not just language: an analysis of discursive constructions of disability in sentencing remarks  8. Policing normalcy: sexual violence against women offenders with disability  9. ‘The government is the cause of the disease and we are stuck with the symptoms’: deinstitutionalisation, mental health advocacy and police shootings in 1990s Victoria  10. Disruptive, dangerous and disturbing: the ‘challenge’ of behaviour in the construction of normalcy and vulnerability  11. Making the abject: problem-solving courts, addiction, mental illness and impairment  12. Cripwashing: the abortion debates at the crossroads of gender and disability in the Spanish media  13. ‘Figurehead’ hate crime cases: developing a framework for understanding and exposing the ‘problem’ with ‘disability’

Gerard Goggin is Professor of Media and Communications and ARC Future Fellow at the University of Sydney, Australia. He has published widely on the social and cultural dynamics of disability, including Disability in Australia (2005) and Digital Disability (2003) (both with Christopher Newell), Disability and the Media (2015, with Katie Ellis), Routledge Companion to Disability and Media (2018, with Katie Ellis and Beth Haller) and Listening to Disability: Voices of Democracy (2018, with Cate Thill and Rosemary Kayess).

Linda Steele is a Senior Lecturer in Law at the University of Technology Sydney, Australia. Her research explores the intersections of disability, law and injustice. She has published in journals across law, criminology and gender & cultural studies.

is an independent scholar with an abiding interest in corporeal differences and its significance in contemporary culture, especially medical and legal cultures. Her doctoral thesis focused on experiences of suffering and how these are bound up with medical ‘solutions’ of normalization, while her postdoctoral project explored therapeutic forgetting, a response to trauma. Her work has been published in numerous international journals, including Social Semiotics, Australian Feminist Studies, International Journal of Feminist Approaches to Bioethics and Somatechnics.