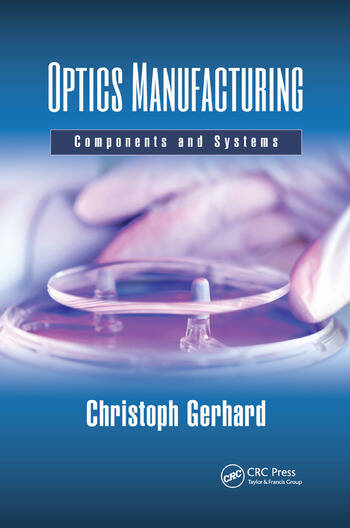 Optical components are essential key elements in modern engineering and everyday life. The education of skilled personnel and specialists in the fields of theoretical and practical optics manufacturing is of essential importance for next-generation technologies. Against this background, this book provides the basis for the education and advanced training of precision and ophthalmic optics technicians, craftsmen, and foremen, and it is an extensive reference work for students, academics, optical designers or shop managers, and production engineers. It not only covers particularly used and applied machines, working materials, testing procedures, and machining steps for classical optics manufacturing, but it also addresses the production and specification of optical glasses as well as unconventional production techniques and novel approaches. Optics Manufacturing: Components and Systems furthermore covers the basics of light propagation and provides an overview on optical materials and components; presents an introduction and explanation of the necessary considerations and procedures for the initial definition of manufacturing tolerances and the relevant industrial standards for optics manufacturing; and addresses the production of micro optics, the assembly of opto-mechanical setups and possible manufacturing errors, and the impact of the resulting inaccuracies. In order to allow fast and clear access to the most essential information, each chapter ends with a short summary of the most important aspects, including an explanation of relevant equations, symbols, and abbreviations. For further reading, extensive lists of references are also provided. Finally, exercises on the covered basic principles of optics, approaches, and techniques of optics manufacturing—including their corresponding detailed solutions—are found in the appendix.

After his apprenticeship and subsequent 2-years occupation as skilled engineering worker in precision optics, Dr. Gerhard studied Optical Precision Manufacturing Technology at the University of Applied Sciences in Göttingen, Germany. In 2006, he prepared his diploma thesis on the development of novel short-pulse laser sources for materials processing applications at the Institute of Optics in Orsay, France. For the results of this work, he received the Georg-Simon-Ohm Award from the German Physical Society in 2009.

After working in industry as product manager for optics for 3 years, he started working on the scientific investigation of laser-based materials processing at the University of Bremen in 2009. In addition, he extra-occupationally studied Optical Engineering and Photonics and received his master’s degree in 2010. Dr. Gerhard then worked as scientific coordinator of the Lower Saxony Innovation Network for Plasma Technology in Göttingen and Clausthal-Zellerfeld, Germany. In the course of this function, he investigated novel hybrid plasma-assisted laser processing techniques for the machining of optical glasses.

Based on this research, he received his doctor's degree in Natural Sciences and Physical Technologies from Clausthal University of Technology in 2014. In 2015, his doctoral thesis was awarded the Young Talent Award Green Photonics by the Fraunhofer Society. He currently works as scientist at the Fraunhofer Application Center for Plasma and Photonics in Göttingen, Germany. In addition, he is assistant professor and guest lecturer for optical system design, optical manufacturing, photonics and laser processing at different German universities.

Dr. Christoph Gerhard is member of the German Physical Society and the German Society for Plasma Technology. He authored and co-authored 27 original research papers and is the chief editor of a textbook on laser ablation. He further authored two textbooks on principles of optics and plas