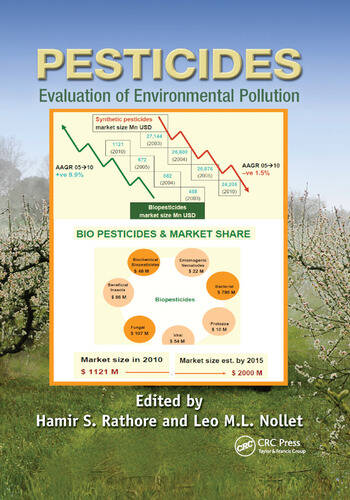 Pesticides play an important role in controlling pests that carry diseases and threaten crop production. In recent years, however, there has been increased concern about the adverse impacts of pesticides and their degradation products on public health and the environment. A considerable amount of work is being done to develop nonchemical methods of pest control, but it is not yet feasible to dispense with the use of chemical pesticides.

Pesticides: Evaluation of Environmental Pollution brings together, in a single volume, current knowledge on environmental pollution caused by pesticides. It helps readers evaluate the effects that pesticide residues have in all compartments of the environment.

Featuring contributions by eminent scientists from around the world, the book gives an overview of the fate and transport of pesticides and their degradation in the environment. Detailing the sources, concentration, and hazards of residues, it examines their effects in humans, birds and mammals, fish, soil invertebrates, soil microflora, aquatic invertebrates, water, milk products, and more. The book also addresses endocrine-disrupting pesticides and explores biopesticides as alternatives to chemical pesticides.

A review of data on the potential hazards of pesticides, this reference will be of interest to readers working in the areas of chemical crop protection and pollution management. It adds a balanced perspective to the debate between those who think that pesticides should be banned and those who consider the continued use of large quantities to be necessary for the survival of humanity.

Hamir S. Rathore is a Professor in the Department of Applied Chemistry at Aligarh Muslim University, India.

Leo M.L. Nollet is a Professor in the Department of Applied Engineering Sciences at University College Ghent, Belgium. For more about Dr. Nollet, visit http://www.leonollet.be.