The Age of Thomas Nashe
Text, Bodies and Trespasses of Authorship in Early Modern England 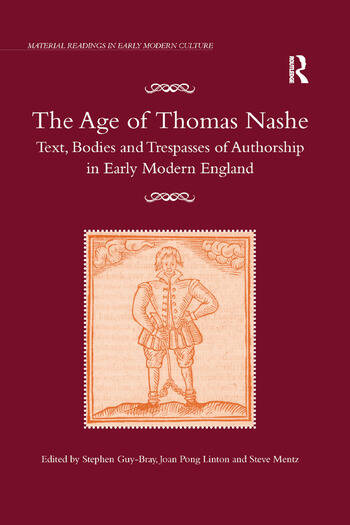 The Age of Thomas Nashe: Text, Bodies and Trespasses of Authorship in Early Modern England

Traditional literary criticism once treated Thomas Nashe as an Elizabethan oddity, difficult to understand or value. He was described as an unrestrained stylist, venomous polemicist, unreliable source, and closet pornographer. But today this flamboyant writer sits at the center of many trends in early modern scholarship. Nashe’s varied output fuels efforts to reconsider print culture and the history of the book, histories of sexuality and pornography, urban culture, the changing nature of patronage, the relationship between theater and print, and evolving definitions of literary authorship and 'literature' as such. This collection brings together a dozen scholars of Elizabethan literature to characterize the current state of Nashe scholarship and shape its emerging future. The Age of Thomas Nashe demonstrates how the works of a restless, improvident, ambitious young writer, driven by radical invention and a desperate search for literary order, can restructure critical thinking about this familiar era. These essays move beyond individual and generic conceptions of authorship to show how Nashe’s career unveils the changing imperatives of literary production in late sixteenth-century England. Thomas Nashe becomes both a marker of the historical milieu of his time and a symbolic pointer gesturing towards emerging features of modern authorship.

Section 1 Beyond the City: Sex and the city:  Nashe, Ovid and the problems of urbanity.  This sorrow's heavenly: Christ's Teares and the Jews.  Blame-in-praise irony in Lenten Stuffe.  Nashe's fish: misogyny, romance, and the ocean in Lenten Stuffe.  Section 2 Mediating Bodies:  Reproducing paper monsters in Thomas Nashe.  Nashe's extemporal vein and his Tarltonizing wit.  Gross anatomies: mapping matter and literary form in Thomas Nashe and Andreas Vesalius.  Section 3 Trespasses of Authorship:  Wit without money in Nashe.  Nashe's vain vein: poetic pleasure and the limits of utility.  Postscript: Nashe untrimmed: the way we teach him today.