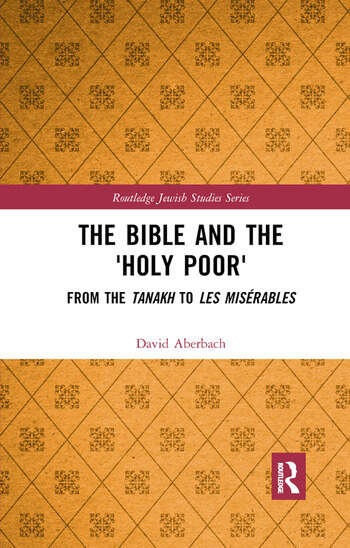 The Bible and the 'Holy Poor': From the Tanakh to Les Mis�bles

The Hebrew Bible is the main legislative and literary influence on European Poor Law and on literature on poverty and the poor. No extant literature from the ancient world placed more importance upon social welfare and the duty of the better-off toward the poor. It is the founding text for liberation movements.

This book assesses why the Bible is so unambiguously positive in its view of the poor, unlike most later literary and legislative works. It seeks to understand what historical circumstances brought about this elevated perception of the poor, by exploring the clash of ideals and realities in the depiction of the poor in the Hebrew Bible and in European culture. Most legal and literary portrayals of the poor tend to be critical, associating the poor with laziness, crime or fraud: why is this not the case in the Bible? Most societies have tended to accept poverty as a natural condition, but not the Bible. The idea of ending poverty starts in the Bible – the Psalms above all inspired a daily struggle to limit the gap between rich and poor. Much of the Bible sees life - most unusually in the history of civilizations - through the eyes of the poor. The book argues that the popular appeal of the Bible in largely impoverished societies lies in its persistent relevance to, and support of, the poor. Yet, in many ways, biblical teachings were incompatible with social and political circumstances centuries and millennia later.

Written in a clear, accessible style, the book shows how the Hebrew Bible, in its legislation and impassioned prophetic poetry, inspired the battle to 'make poverty history', to give dignity and hope to the poor and fight inequality. It will appeal to students and scholars of Jewish Studies, the Bible and Comparative Literature, and Development Studies.