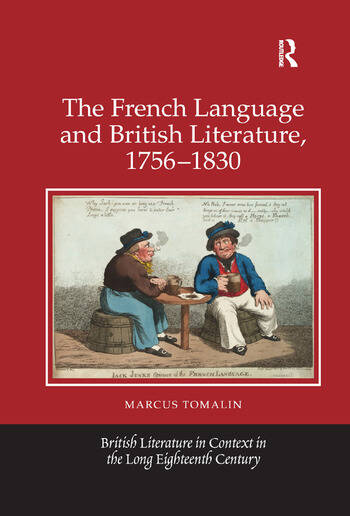 From the 1750s to the 1830s, numerous British intellectuals, novelists, essayists, poets, playwrights, translators, educationalists, politicians, businessmen, travel writers, and philosophers brooded about the merits and demerits of the French language. The decades under consideration encompass a particularly tumultuous period in Anglo-French relations that witnessed the Seven Years' War (1756-1763), the American War of Independence (1775-1783), the Revolutionary and Napoleonic Wars (1792-1802 and 1803-1815, respectively), the Bourbon Restoration (1814-1830), and the July Revolution (1830) - not to mention the gradual expansion of the British Empire, and the complex cultural shifts that led from Neoclassicism to Romanticism. In this book, Marcus Tomalin reassesses the ways in which writers such as Tobias Smollett, Maria Edgeworth, William Wordsworth, John Keats, William Cobbett, and William Hazlitt acquired and deployed French. This intricate topic is examined from a range of critical perspectives, which draw upon recent research into European Romanticism, linguistic historiography, comparative literature, social and cultural history, education theory, and translation studies. This interdisciplinary approach helps to illuminate the deep ambivalences that characterised British appraisals of the French language in the literature of the Romantic period.

Table of Contents to come.

Marcus Tomalin is a Fellow and Tutor at Downing College at the University of Cambridge, UK. He is also an Affiliated Lecturer in the Cambridge English Faculty.