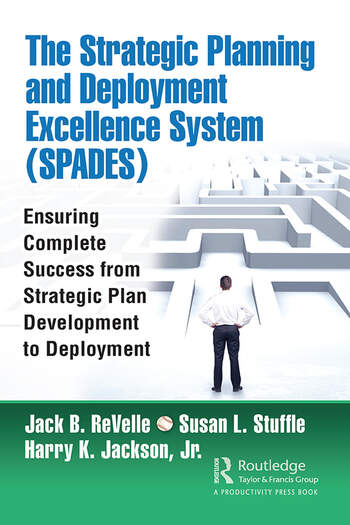 The Strategic Planning and Deployment Excellence System (SPADES) provides a path to long-term success in the environment of rapidly changing technology and business systems. It combines the best of Hoshin Kanri, Quality Function Deployment (QFD), and other proven management and leadership tools and techniques. This book presents a set of tools and techniques for developing and deploying a long-term plan for achieving sustained success. These concepts ensure graphically tracing the strategic planning process from the foundation of organizational principles to the enterprise vision and to the organization’s long-term goals.

The Scientific Method is the foundation upon which the tools and techniques of SPADES are applied. The Scientific Method begins with an observation of a phenomenon which leads to development of a hypothesis to explain the phenomenon. The hypothesis is then tested and, based on the analysis of the results, then accepted or adjusted as necessary. The testing may then be repeated to verify conclusions. The Deming-Shewhart Cycle of plan-do-check-act (PDCA) is the application of the Scientific Method for control and continual improvement of processes and products. SPADES is the integrated evolution of the PDCA Cycle and QFD to answer the challenges of how to stay competitive, year after year, in a dynamic environment of rapidly changing customer requirements and technology.