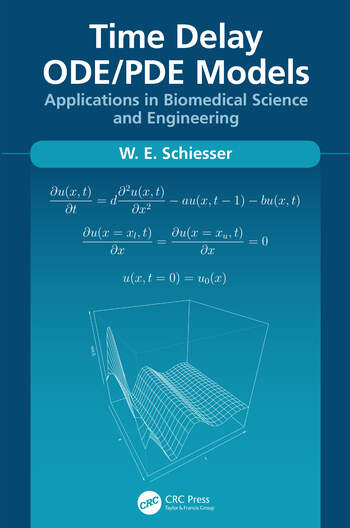 Time delayed (lagged) variables are an inherent feature of biological/physiological systems.  For example, infection from a disease may at first be asymptomatic, and only after a delay is the infection apparent so that treatment can begin.Thus, to adequately describe physiological systems, time delays are frequently required and must be included in the equations of mathematical models.

The computer-based implementation of the example models is explained with routines coded (programmed) in R, a quality, open-source scientific computing system that is readily available from the Internet.  Formal mathematics is
minimized, e.g., no theorems and proofs. Rather, the presentation is through detailed examples that the reader/researcher/analyst can execute on modest computers.

The DPDE analysis is based on the method of lines (MOL), an established general algorithm for PDEs, implemented with finite differences.  The example applications can first be executed to confirm the reported solutions, then extended by variation of the parameters and the equation terms, and even the forumulation and use of alternative DODE/DPDE models.

• Illustrates the computer implementation of DODE/DPDE models with coding (programming) in R, a quality, open-source scientific programming system readily available from the Internet