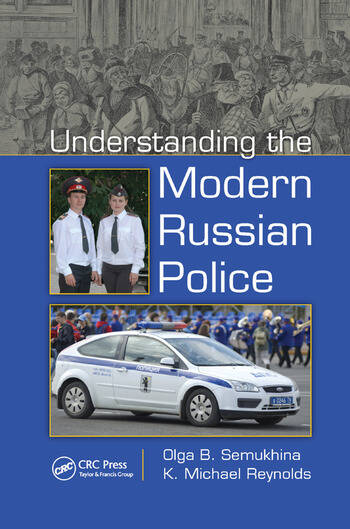 Understanding the Modern Russian Police represents the culmination of ten years of research and an ongoing partnership between the Volgograd Academy of Russian Internal Affairs Ministry (VA MVD) and the Volgograd branch of the Russian Presidential Academy of National Economy and Public Administration (VAPA). The book provides a timely and comprehensive analysis of the historical development, functions, and contemporary challenges faced by the modern Russian police.


Spanning more than two centuries of history, the book covers:

The book concludes with some predictions on the future of the Russian police and its potential reforms. Encompassing the efforts of many great researchers from Russia, this exhaustive review of the history of policing in Russia enables readers to comprehend the societal and political forces that have shaped policing in this country.

Dr. Olga B. Semukhina is an assistant professor of criminology and law studies at Marquette University. Dr. Semukhina holds a law degree from Tomsk State University and Master of Science degree in criminal justice from the University of Central Florida (UCF). She defended her SJD dissertation on international standards and comparative criminal procedure at Tomsk State University in 2002. In 2007, Dr. Semukhina defended her PhD dissertation on rule of law and comparative court process at UCF. Dr. Semukhina is also a former defense attorney in Russia and a former assistant professor of criminal law and procedure at Tomsk State University. Dr. Semukhina received multiple grants from the Ford and the Soros Foundations, the Open Society Institute, the Civil Education Project, the IREX and the Bureau of Democracy, Human Rights and Labor (U.S. State Department) to conduct research and sustain the development of legal services Russia. Together with Dr. Reynolds, Dr. Semukhina participated in a number of projects examining police corruption and misconduct in Russia.

joined the faculty at the University of Central Florida in 1997. He was a law enforcement practitioner for 12 years prior to entering academia. For more than a decade, he has worked with Russian colleagues in Volgograd and Moscow. He also participated in educational programs in Tbilisi, Georgia, at the International Black Sea University. Dr. Reynolds received a long-term Fulbright award in 2007 and was hosted by the Volgograd Academy of the MVD of the Russian Federation. There, he taught courses utilizing GIS for crime analysis and conducted empirical research with Dr. Semukhina. This decade-long partnership with numerous Russian collaborators provided a framework to secure a U.S. Department of State grant to promote civil society and address human rights issues in Southern Russia.