Union and Disunion in the Nineteenth Century 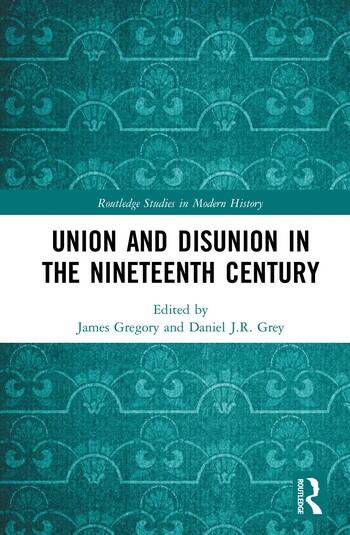 Union and Disunion in the Nineteenth Century

This volume examines the nineteenth century not only through episodes, institutions, sites and representations concerned with union, concord and bonds of sympathy, but also through moments of secession, separation, discord and disjunction. Its lens extends from the local and regional, through to national and international settings in Britain, Europe and the United States. The contributors come from the fields of cultural history, literary studies, American studies and legal history.

Part III The politics of union and disunion in Great Britain
5 Scottish political leadership and Anglo-Scottish union in the long nineteenth century GORDON PENTLAND
6 An ‘lllegal Union of Lawyers, and Writers, and Political Baronets’: the Conservative party and Scottish governance, 1832–1868 GARY D. HUTCHISON
7 Union Street: more than simply a metaphor for the coming together of Plymouth’s Three Towns? KIM STEVENSON AND JUDITH ROWBOTHAM

PART IV Union and disunion in the United States of America
8 The union of enslaved couples during the disunion of the nation: love, discord and separations in US slavery and thereafter EMILY WEST
9 Attempting disunion: Mutable borders and the Mormon experience with the United States, 1846–1858 PEARL T. PONCE
10 The South Carolina jeremiad: reinterpreting John C. Calhoun’s legacy in the 1850s LAWRENCE T. MCDONNELL

is Associate Professor in Modern British History at the University of Plymouth. Among his publications is The Poetry and the Politics: Radical Reform in Victorian England (2014).

is Lecturer in World History since 1800 at the University of Plymouth. Among his recent publications is the co-edited collection Judgment in the Victorian Age (Routledge, 2018), with Annika Bautz and James Gregory.